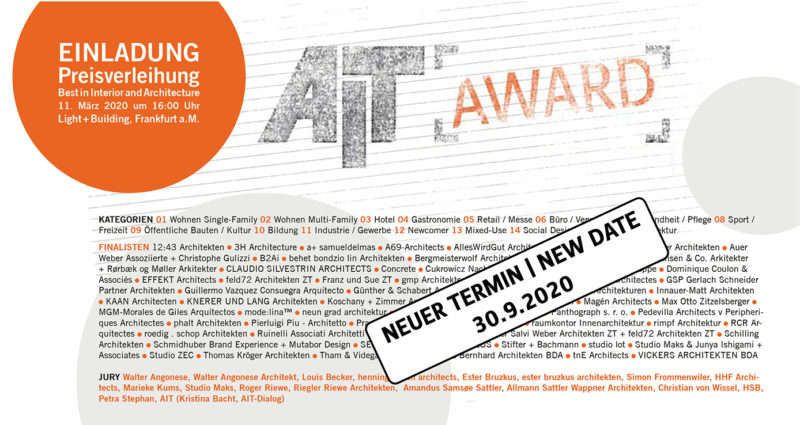 Architecture offices from 47 countries had submitted their completed projects by 17 December 2019, thus competing for the AIT-Award 2020. At the end of January 2020, the jurors met in Hamburg to select this year’s winners in the 14 categories from 877 entries. The festive award ceremony will take place on 30 September 2020 from 4.00 pm at Light + Building trade fair in Frankfurt am Main. During the trade fair, the award-winning projects will be presented in the AIT special area in Hall 1.2 | A51. This will be followed by a documentation of the award-winning projects in a special edition of AIT-Dialog magazine and exhibitions at the AIT-ArchitekturSalons.

For the fifth time, AIT and AIT-Dialog offered the internationally highly regarded interior design/architecture award, thus following on from the successful competitions held in 2012 to 2018.

The AIT-Award is divided into 14 categories: all architectural projects and interiors completed in the last two years were eligible for entry. The two special themes “Mixed-use” and “Social Design / Participatory Architecture” were also included. Furthermore, a separate category was dedicated to “young architects”.

A total of 877 projects from 47 countries were submitted for the AIT-Award 2020 | Best in Interior and Architecture. The top-class jury selected the ten to fifteen best projects in each category on 23 and 24 January 2020 in Hamburg. The exact rankings will be announced at the award ceremony.
This year’s finalists come from Austria, Belgium, Brazil, Germany, Denmark, Finland, Italy, Japan, Malaysia, Mexico, the Netherlands, Portugal, Slovenia, Spain, Sweden, Switzerland and the USA.

The rankings will be announced by the jurors and the AIT editorial team on 30 September 2020 during a festive award ceremony in the presence of the nominated interior design/architecture firms in the context of Light + Building in Frankfurt am Main.

During the Light+Building trade fair in Frankfurt am Main from 27 September to 2 October 2020, the award-winning projects will be exhibited in the special AIT area in Hall 1.2 | A51. Following this, the winning projects of the AIT-Award 2020 will be on display at the AIT-ArchitekturSalons and published in AIT-Dialog.

Registration is requested by 18 September 2020. Once you have registered for the AIT-Awards ceremony, you will receive a voucher code with your confirmation of participation by e-mail (two weeks before the event), which will give you free access to the exhibition grounds and the award ceremony.
For further information please contact ait-award@ait-online.de or +49 40 7070898-12.

In case you had registered for the original date of the award ceremony your registration remains in our system. Should there be any changes on your side, for example regarding the number of registered persons or their names/contact details, please inform us by e-mail or fill in a new form.

You will receive an updated participation confirmation in the coming weeks. The voucher code, which gives you free entry to the exhibition grounds, will be sent to you by e-mail two weeks before the date of the award ceremony.