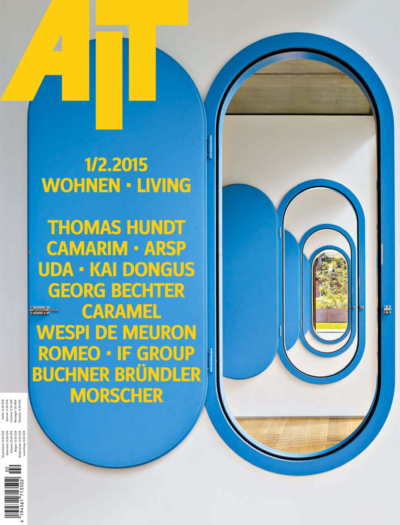 Unfortunately out of print

have you also told yourself to take it a little easier in the New Year? In the first weeks we already had to lower our sights in this respect and have managed a real trade fair hopping between Frankfurt, Hanover, Cologne, and Munich! Before that we already raised our glasses on the 125th anniversary of our foundation. On 10 January 1890, Alexander Koch, the founder of our publishing house of the same name, brought the first issue of ‘Innen-Dekoration’, the forerunner of AIT, to the market. The guide on home furnishing quickly evolved into a guideline for all questions of taste and style in modern life. In subsequent years, Koch committed himself as a successful publisher and exhibition organiser, and in 1898 he laid the foundation for the construction of the
famous artists’ colony at the Mathildenhöhe in Darmstadt. Until his death in 1939, Alexander Koch was to be found wherever the new time presented itself in a new form. The first post-war issue – after a two years time-out due to the war – was published in 1946 under the tile “Architektur und Wohnform”. Koch’s son, Alexander Koch junior, not only adapted the title, he also adapted the content to the requirements of the postwar period: the reports focused on cost-efficient small houses and their furni shing. Thanks to numerous contributions by foreign correspondents, the journal soon lived up to the successes of the pre-war period. In 1971, the title “Architektur und Wohnform” was changed to “Architektur und Wohnwelt“ when the publishing house was sold to the Weinbrenner Family. The subtitle “Zeitschrift für Architektur, Innen architektur und Technischer Ausbau” finally became the current title “AIT” in 1980! And still today we do report – as in this issue – on remarkable small and large residen ces from Germany and abroad however expanded the range of topics from home interiors to current building tasks such as offices, shopfitting and trade fair construction, public buildings, restaurants, healthcare buildings as well as banks and authorities. After 123 years of appearance fresher and more topical than ever! This is verified by numerous awards and a large and loyal readership! This will continue to be our obligation and incentive in the future – we already work on specials for the 125th anniversary of foundation.