In 2018 non-profit Studiolight ‘s design-build exhibition entitled; “Macassar Who we are” explored the re-authoring of socio-spatial narratives and how these can critically engage the postcolonial challenges of displaced communities in South Africa. Through a street photography and storytelling project, its objective to  counter stigmatization by re-telling the stories of Macassar from the lived perspective of youth from the area, the project secured the UCT Creative works award in 2019. Assisted by 10 students from UCT’s School of Architecture, Planning & Geomatics the group used found objects to construct exhibition installations that showcased their photography. The installations were also used as temporary participatory spatial interventions that forged common (shared) spaces for intergenerational dialogue. Stories by elders in response to images taken by the youth were included in the exhibition to instill new stories of hope and dignity. This unexpected responses from the broader community revealed the need for a common space where conversations around building community resilience through storytelling could continue with members of the community.

In July 2019 40 students from UCT’s School of Architecture, Planning and Geomatics; the Cape Peninsula University of Technology (CPUT); Germany’s Rheinisch-Westfälische Technische Hochschule (RWTH) Aachen University and the Peter Behrens School of Arts (PBSA) at the University of Applied Sciences Düsseldorf; joined forces with the non-profit to collectively design and construct a common space situated in the community of Macassar. Together with a few key staff members ( Clint Abrahams, Katie Ewing, John Coetzee, Shafiek Matthews, Bernadette Heierman, Anna Weber, Milica Lopicic, Kirsty Dormann, Rudolf Perold, Hermie Delport, Judith Reitz, Thomas Georg Schaplik, Franz Klein Wiele, Nora Mueller) with input  by architect Carin Smuts and academic exchange initiative entitled “Emergent Common Spaces” was hosted as a summer /winter school. Funded by Deutscher Akademischer Austauschdienst (DAAD) ,the summer/winter school explores ways of thinkingabout building community resilience by understanding how common spaces and the intergenerational practices that produce them can generate spatial types in the absence of civic-institutional support. Using language, and making, as analytical lenses the  intersection between (community) storytelling and design-build pedagogy enables the emergence of a form of socio-spatial restorative architectural practice between community and institutions of higher learning. The research was done through a series of dialogues, mappings, and design projects focussed on Ring and Link Avenue, Macassar at an urban scale and Bong’s Place in Link avenue to test ideas at 1:1 scale through  the refurbishment of an old shack.

The project had to overcome three key challenges, the paring of second year students with post grad students, aligning non parallel academic programs and finding spaces within the community  to execute the project.

The last meaningful architectural studies of Macassar were done in the 1980s by Gawie and Gwen Fagan. These studies produce drawings of Zandvliet’s Werf and a later restoration of Rahima’s cottage situation at the foot of Sheik Yusuf’s tomb at the Kramat.  Despite these no information was available on the architectural becomings of the township. A semester design studio centred around the street as public space was integrated into the second year BAS course curriculum. Carefully planned  field trips with the community enable comprehensive mapping of the earliest built council houses ( along Ring and Link Avenue) and how social practices have produce public spaces over time between these to knit together a broken community spirit after the forced removals of the 1970s. Students then explored the potential of the street and interstitial spaces as public space in the township by designing storytelling spaces, a community classroom, and an indoor sports facility. These were all aimed at directing the energies of emerging commons spaces to coagulate into a larger civic domain along Ring and Link avenue. At the end of the semester, students produce invaluable base information that was used to kick start the summer/winter school. The initial stage of the project took place during the first quarter of the year and all ninety second-year students took part. Fifteen students then applied to participate in the summer/winter school all of whom demonstrated an above-average maturity and willingness to effect change in society through strong motivations. These students developed confidence in working with the community and ultimately lessen the knowledge gap between themselves and postgrad students during the summer/winter school with many of the participating second years taking on leadership roles in research and design. In parallel to this, the community also  became more familiar with students as regular field trips built trust and safe environments for students to participate in.

During the June mid-year break 30 students  and academics from UCT, RWTH and CPUT came together for what would become the first phase of the summer/winter school exchange, this time hosted in self-build spaces built by residents in Macassar. Following a workshop on architectural ethnography a more in depth study was done through interviews by students who were now paired in groups with members of the community. A series of ethnographical drawings was produced to capture findings that could generate ideas for an urban strategy and the design of a  common space. Following a urban design proposal by the students these ideas were tested at 1: 1 scale at the home of Thomas and Enith Adonis. Here an unsafe shack with leaking roof used at the time as a temporary gallery alongside its everyday practices was made available for re-furbishment.

The design brief was to extend the life of the shack and to reaffirm its placemaking characteristics produce by its socio-spatial practices. The key design parts included a new roof, a new fence and outdoor exhibition space that would collectively accommodate the multiple uses of the space while creating a civic scale marking the significance of the street intersection. Using the ethnographical information and an analytical study of the shack’s building elements and its assembly, students embarked on a design for a roof. Timber construction was explored in three design proposals that was then presented at a exhibition where members of the community could give further input.

With the community one of the design was selected for further development with the students and staff of PBSA. Designs where shared via study portals with weekly skype meetings between staff and structural engineers in both hemispheres ensuring the refinement the design. Funding for construction was limited with proceeds coming from HBSC and Studiolight. With the entire project approximately R50 000, tools ,materials donated by variety of companies and re-use of old materials made the project possible. These materials included timber from the non-profit previous year’s exhibition installation, translucent sheeting , electrical supplies and façade prototyping components of previous design build projects by PBSA and RWTH. After a structural inspection of the existing structure it was decided to also rebuild the walls of the shack. The demolition work, masonry work, steel and electrical work was led by the community supported by students while work on the timber superstructure was to be carried out by students and supported by members of the community.

Finding spaces to work from

With the arrival of PBSA students in September, completing the second phase of the summer/winter school required a space for production of building components. This was overcame by making serviceable the redundant workshop spaces of the Macassar secondary school. Students were then task to develop the design drawings and to construct prototypes for timber assembly of each component. Once these were approved and tested work continued on completing trusses and wall panels during the first week at the workshop. In parallel to this the community carefully removed the old shack and constructed the blockwork. Concrete footings for the new structure was cast by the community four weeks before the arrival of students. After the first week components were carried by hand in teams to the site 300 metres away from the workshop. These were then erected over the course of four days after which the electrical and roof installation was completed by the community local contractors who donated their services at no cost.

The completed building consisted of a self-supporting timber portal structure placed adjacent to the original council house. The 4 portals replaces the old beam and gum pole structure. Wall panels that allow the filtering of light into the space and ventilation through space was fitted to replace the old rusted corrugated metal walls. The old fence was also replaced with timber framed panels re-establishing the receding boundary line emphasising the positive edge to the street. All the timber connections are made using full and half lap timber joints to create a as layered assembly by making double members columns and trusses. This layering of elements is continued when making the wall panelling again adopting half lap joints to create framed panels. Grooves are cut into the timber members which allows the perspex diffusers to slot into creating a weather-tight façade. The surfaces of the old house are painted with textured paint while a timber slatted wall a remnant of the old shack is kept as a focal wall creating a front to the interior space. Second grade brick paving was laid over the existing concrete surface and creates a hard-wearing inside floor surface. The roof assembly creates an open ceiling space revealing each layer of the construction while translucent roof sheeting allows light in from above creating a collage of shadows on the surfaces below. The result is a warm space that communicates its construction, a loose-fit architecture paying homage to what was before and the many other self-build structures building our communities.

In the end, reducing the knowledge gap of post-grad students by integrating preliminary design and research work in BAS curriculum greatly advanced second-year student confidence enabling them to meaningfully engage with post-grad students during the summer/winter school. The project adopted a phased approached that accommodated the non-parallel academic programs of both hemispheres. This working in tandem ensured continued energy by regularly adding new students to the process. With the overbooked UCT workshop, alternate spaces to work in collaboration was created by resurrecting redundant workshops of secondary schools in Macassar as well as making use of other self-build community spaces.

In parallel with the summer/winter school, Studiolight hosted weekly storytelling sessions with the community. These stories deepen the ethnographical information gather by students. Upon completion of the space, an exhibition of the stories demonstrated the intention of the space and how a dialogue between visitor and the space could co-exist with its everyday practices. Regular meetings is now being held with the community to produce a publication of stories that the process has generated. This will become the first of its kind in the library of Macassar. Many passer byers enter the space to study its construction to generate their own ideas as they re-think their own spaces.

By making connections between the ground practices and teaching practices both local and abroad gave new insight as to how the creation of common spaces for dialogue with the other is possible. At an institutional level between German and South African academics and at intervention level between researchers and the community. Mutual beneficial relationships were a key outcome for all role players to develop a sustainable process and an ongoing relationship. Students were able to gain experience in real a world setting affording them the opportunity to bridge the gap between abstract theory and built architecture while also becoming aware of the ways in which their future professions can shape society. The community of Macassar became aware of the relevance of their stories and how these can generate physical space in their efforts to build their community resilience.

Clint Abrahams is a lecturer in the Undergraduate Architecture program of the UCT – The School of Architecture, Planning & Geomatics, Cape Town, South Africa 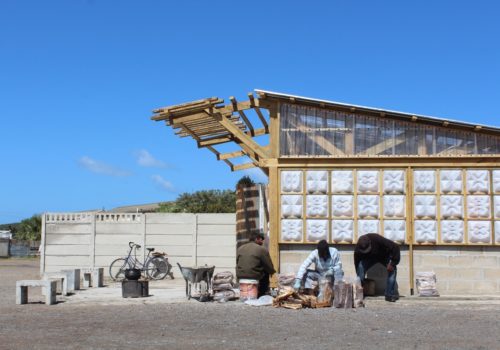 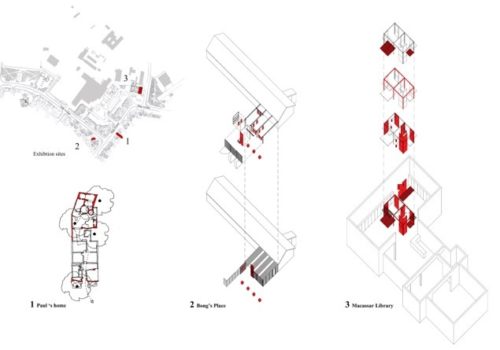 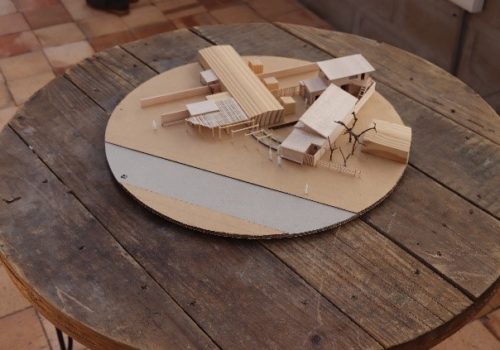 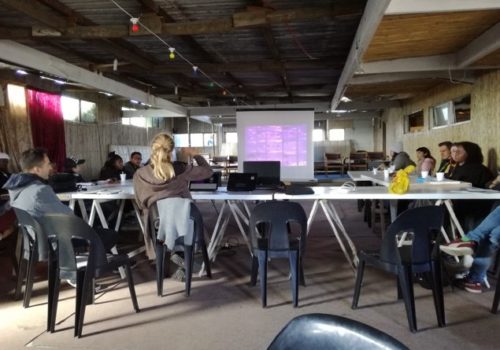 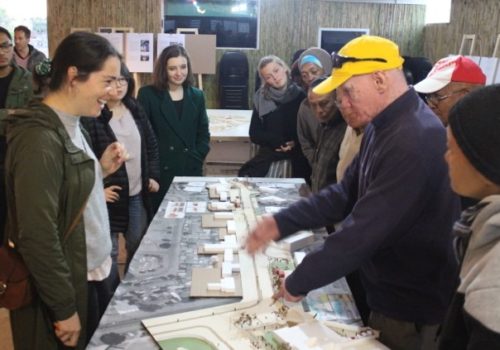 Students presenting designs to members of the community 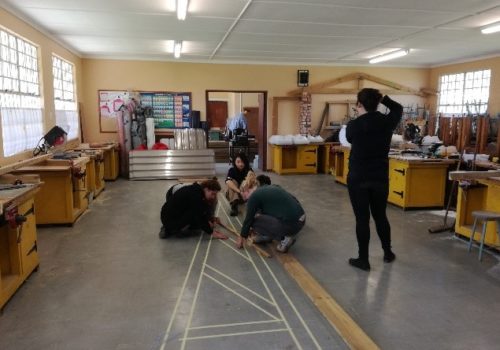 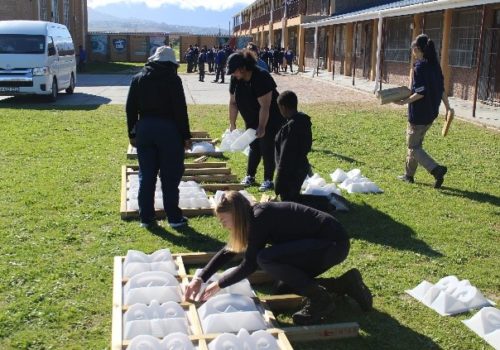 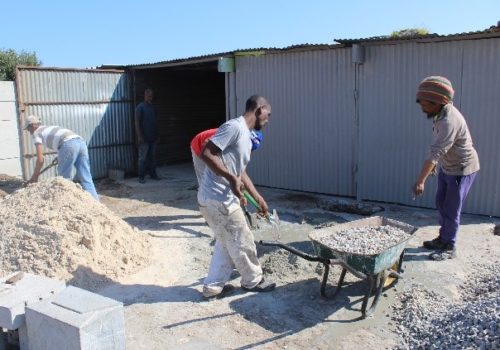 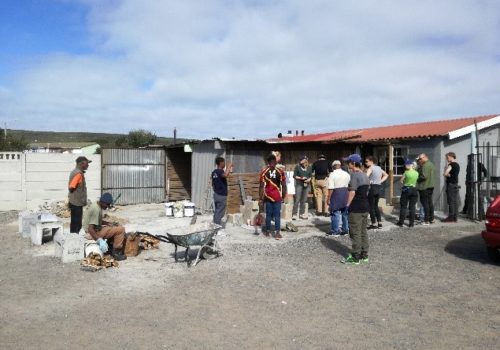 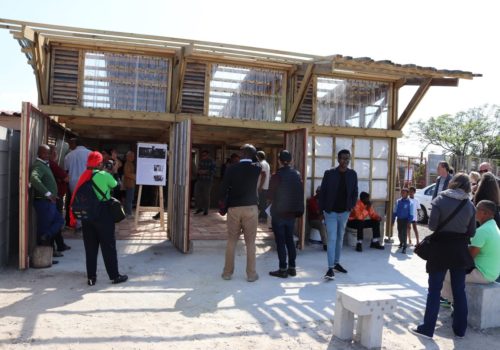 Street facade opening towards the street